These two-piece plastic livestock ear tags can be combined (any female and any male piece) to form a single unit. All male pieces have an open brass tip, it is the actual applicator pin that pierces the ear. This line of tags is now available at National Band & Tag, please call us at 859-261-2035 for a free quote or if you have any questions!

The 2017 style of the year rabies tag is the Blue Rosette.

Why purchase from National Band & Tag?

Hybrid tags feature the best of both worlds to provide a completely customized tag. We can have both stamping and laser etching on the same side or do it front and back like the examples below.

What do you think about hybrid tags? 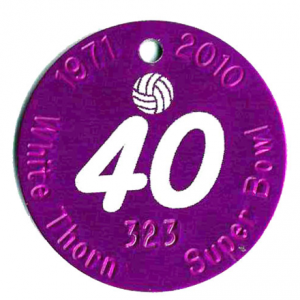 Call or email for a free quote!

Pricing is based on the size of the tag and the amount of laser etching.

This act makes it illegal for anyone to take, possess, import, export, transport, sell, purchase, barter, or offer for sale, purchase, or barter, any migratory bird, or the parts, nests, or eggs of such a bird except under the terms of a valid permit issued pursuant to Federal regulations.

Promote key actions that anyone can take to help birds. This includes participating in citizen science programs such as bird counts; expanding property and homeowner use of bird-friendly practices such as lights out programs, reducing collisions, and maintaining wildlife-friendly gardens; and increasing sales of the Federal Duck Stamp, which protects habitat for migratory birds.

Increase support for migratory bird conservation programs and initiatives by strengthening national and international partnerships and increasing knowledge and understanding of key legislation for migratory birds.

Expand opportunities for engagement in activities such as bird watching, hunting, and conservation, including bird-focused programs and festivals.

To learn more about the Migratory Bird Treaty Act check out:

Need a premium finish for your tags? We can provide that!

Batch Anodizing is a process of coating the tag once it has been die cut. The color covers the entire surface of the tag, including the edges. This creates a much more finished and refined look to your tag. This process is not a standard option, and will incur more cost, but for certain uses is very worthwhile!

Batch Anodized tags must be made from aluminum material. There is a wide variety of color and pattern options available, however keep in mind that they are not UV stable. Please inquire early about your order as the scheduling of certain colors can sometimes be weeks or months out.

We look forward to working with you on your next order — call or email us for more details and pricing.