National Band & Tag manufactures a variety of products for poultry identification such as wing bands, leg bands, and clip-on blinders. We started out selling wing bands and leg bands for chickens back in 1902. To celebrate National Poultry Day, we are recognizing chickens by creating a side by side history timeline of chickens, NB&T, and how the industry grew in the 1900s.

History of Chickens, the Broiler Industry, and National Band & Tag in the 1900s 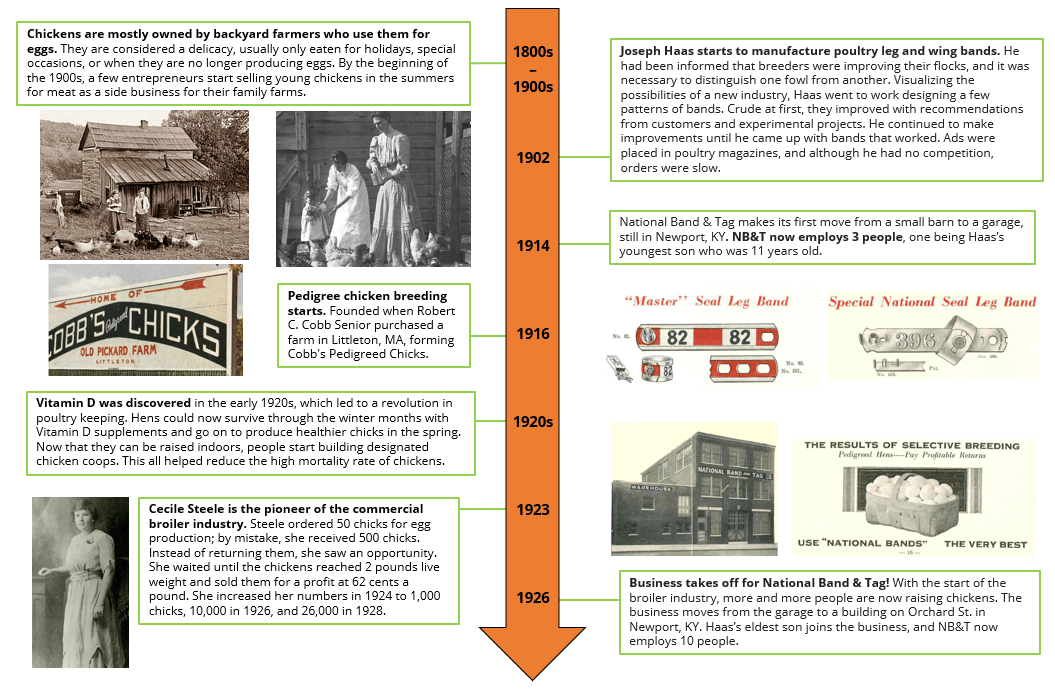 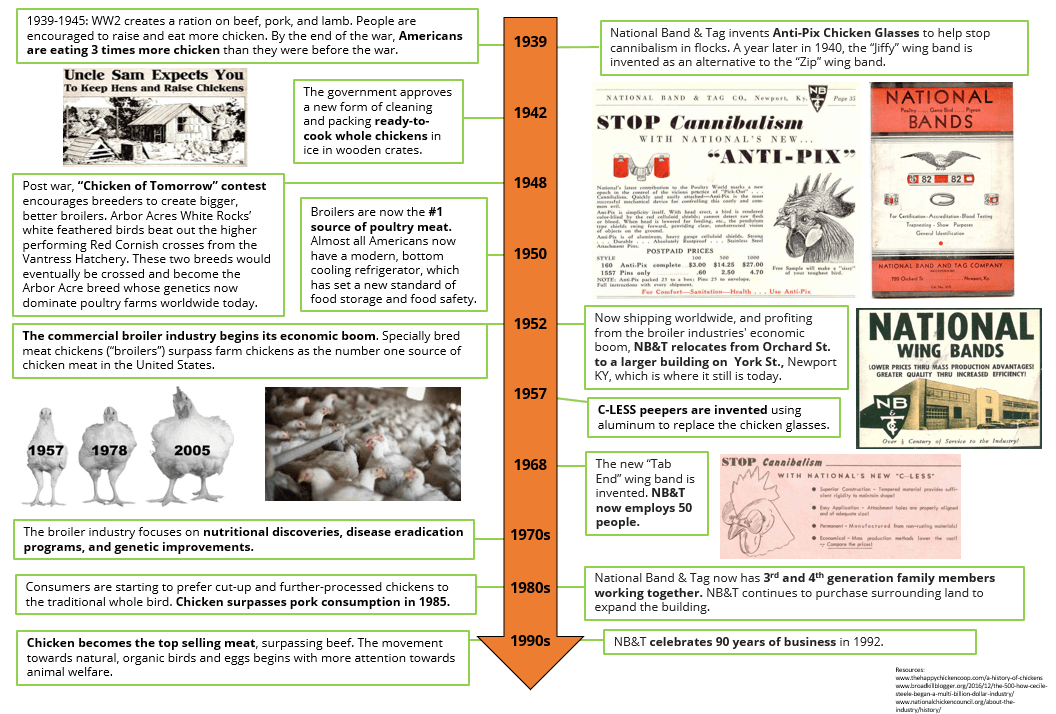 1800s – 1900s:  Chickens are mostly owned by backyard farmers who use them for eggs. They are considered a delicacy, usually only eaten for holidays, special occasions, or when they are no longer producing eggs. By the beginning of the 1900s, a few entrepreneurs start selling young chickens in the summers for meat as a side business for their family farms.

1920s: Vitamin D was discovered in the early 1920s, which led to a revolution in poultry keeping. Hens could now survive through the winter months with Vitamin D supplements and go on to produce healthier chicks in the spring. Now that they can be raised indoors, people start building designated chicken coops. This all helped reduce the high mortality rate of chickens.

1939-1945: WW2 creates a ration on beef, pork, and lamb. People are encouraged to raise and eat more chicken. By the end of the war, Americans are eating 3 times more chicken than they were before the war.

1942: The government approves a new form of cleaning and packing ready-to-cook whole chickens in ice in wooden crates.

1950: Broilers are now the #1 source of poultry meat. Almost all Americans now have a modern, bottom cooling refrigerator, which has set a new standard of food storage and food safety

1980s: Consumers are starting to prefer cut-up and further-processed chickens to the traditional whole bird. Chicken surpasses pork consumption in 1985.

1902: Joseph Haas starts to manufacture poultry leg and wing bands. He had been informed that breeders were improving their flocks, and it was necessary to distinguish one fowl from another. Visualizing the possibilities of a new industry, Haas went to work designing a few patterns of bands. Crude at first, they improved with recommendations from customers and experimental projects. He continued to make improvements until he came up with bands that worked. Ads were placed in poultry magazines, and although he had no competition, orders were slow.

1914: National Band & Tag makes its first move from a small barn to a garage, still in Newport, KY. NB&T now employs 3 people, one being Haas’s youngest son who was 11 years old.

1926: Business takes off for National Band & Tag! With the start of the broiler industry, more and more people are now raising chickens. The business moves from the garage to a building on Orchard St. in Newport, KY. Haas’s eldest son joins the business, and NB&T now employs 10 people.

1939: National Band & Tag invents Anti-Pix Chicken Glasses to help stop cannibalism in flocks. A year later in 1940, the “Jiffy” wing band is invented as an alternative to the “Zip” wing band.

1952: Now shipping worldwide, and profiting from the broiler industries’ economic boom, NB&T relocates from Orchard St. to a larger building on York St., Newport KY, which is where it still is today.