In the early 1990’s the organic beef industry was beginning to take off, with more people recognizing that while it was more expensive, organic meat tasted better because it didn’t have antibiotics or growth hormones used in it. One pioneer of Organic Natural Beef was Mel Coleman Sr., who had a passion for providing natural products to the market.

Kobe beef of Japan had approached Coleman to use his cattle as a source for their natural beef but they wanted more documentation about his “Natural” claim.  This is when Mel Coleman Sr. teamed up with National Band & Tag to create an ear tag that could partner with a tracking system his son-in-law was programming. With this new tracking system, Coleman would then be able to prove that his animals were raised from birth with No Antibiotics, No Added Hormones and No Preservatives… Ever!

National Band & Tag’s Kevin Haas worked closely with Coleman, “My first impression of Mel Coleman Sr. was that he was larger than life. He was a tall, strong man who had a commanding presence but was as gentle as a lamb and was very passionate about his family and his business. I remember talking to Mel one time and he said he wanted us to taste his product to make sure we understood the difference. Two days later a cooler of fresh steaks showed up at our factory. We went out and bought some local steaks and did a blind taste test. Coleman’s products were definitely better! I was so impressed, I saved the label!”

To solve Coleman’s problem of proving his meat was all-natural for Kobe beef, Haas came up with the idea of using a special coated metal ear tag that allowed for a permanent bar code to be Laser Marked onto the tag. Due to the design of the tag, the bar code was protected inside the ear throughout the life of the animal. The bar-coded ear tag, Style 56, proved to be a low-cost method to electronically identify his entire herd of Natural Cattle, thus showing the “Farm to Table” traceability.

At about this same time, the USDA had created a new food label called “Organic”. Coleman applied for this label using the new ear tag program as proof of his organic methods and he was immediately granted the 1st Certified Organic Beef label in the USA. There was a lot of work that went into this accomplishment and everyone from National Band & Tag was proud to have been a part of it.

In 2004 Mel Coleman Sr. was named as one of BEEF Magazine’s Top 40 contributors to the building of today’s dynamic and exciting beef industry, “Coleman was one of the first to use ear tag record systems for verifying production protocol, and developed humane production and handling requirements that are now standards for natural meat production.” (http://beefmagazine.com/mag/beef_beef_top_2)

Today, organic products are in high demand. The bar has been set high for safe, fresh and wholesome foods. Little did he know, but Mel Coleman Sr. was way ahead of his time. 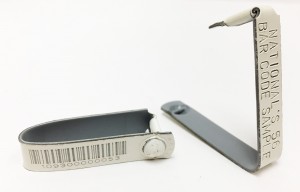 The picture above is a sample from the 1990’s of the tags NB&T made for Coleman. In a 1997 interview with In Motion Magazine, Mel Coleman Sr. mentioned the ear tags used to identify the cattle, “When we get about 100 [calves] we’ll move them off and work them. We call working them as this: when they’re about a month old, we’ll put a tag in their ear, which is an ID tag. … They carry this little white tag in their ear all their life.” (http://www.inmotionmagazine.com/coleman.html)

Mel Coleman Sr. passed in 2002, but his legacy and practices continue through Coleman Natural Foods, “The Way Nature Intended, for Over 125 Years®”.

Happy Thanksgiving — It’s Turkey Time! The Bird is the Word Scroll to top